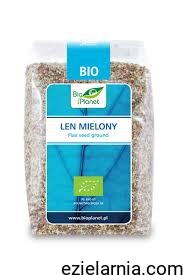 Availability: available
Dispatched within: 5 days
Delivery: The price does not include any possible payment costs check the delivery methods
Price: £2.49 2.49

Properties of linseed Linseed is a means of protecting the digestive tract. Aqueous seed extracts coat the mucous membranes of the stomach and esophagus, protecting them from harmful substances (seeds immersed in water swell and become covered with a layer of mucus). Interestingly, flax seed mucus does not lose its stickiness for a long time. Thanks to this, it can travel all the way to the large intestine, trapping harmful compounds and hindering their absorption.

The seeds also have a slightly laxative effect. They swell in the large intestine, accelerate the worm's movements, facilitating defecation. Flaxseed may inhibit the development of breast cancer A due to the content of unsaturated fatty acids, including prevents atherosclerosis and has a great effect on skin elasticity. Lignans contained in flax seeds are especially recommended for women in the perimenopausal age because they regulate the level of estrogens. Recent studies also confirm that a daily intake of 5-10 g of linseed inhibits the development of breast cancer in postmenopausal women. The seed can also be used externally - it has a softening and anti-inflammatory effect.

The daily intake of linseed should be 2-3 tablespoons. At the beginning of the use of linseed, you can eat less of it, and over time more. It is an individual matter, determined depending on the characteristics of a given organism. It is recommended to grind the grains before consumption. After grinding, you can sprinkle it on literally anything. Suitable for sauces, yoghurts, salads, soups, sandwiches and baking. The taste of the seeds is mild and neutral.

Shipping costs The price does not include any possible payment costs